The UofT English student and ‘BookTok’ influencer on fostering a love of books for a new generation. 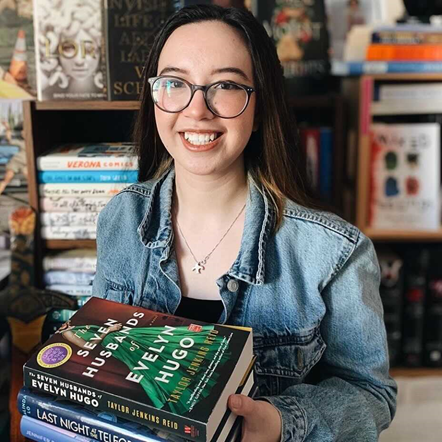 Peruse the selections at your local Indigo bookstore one day, and you will come across a new section, now a standard feature across all the company’s locations: the ‘Trending on TikTok” book island, with titles ranging from Madeline Miller’s The Song of Achilles to Leigh Bardugo’s Six of Crows, among others.

“I always want to fix the section whenever I see it,” shared Bridget Raymundo, a ‘BookToker’ and life-long reader. “Sometimes they just don’t have the right books.”

The titles occupying space on university syllabuses do not often reflect popularity or mainstream taste. A booklist curated from popular titles on TikTok, on the other hand, is unified by the ability of its contents to speak to young readers of this generation. Raymundo, who grew up loving YA romance and fantasy novels, welcomes this renewed popularity of the books that first ignited her passion for reading.

“When I started my undergrad, I began to fall out of love with reading, something which I think happens to a lot of English students,” admitted Raymundo. “Anything I wanted to read for pleasure that wasn’t for school felt like a poor use of my time.”

Soon after the pandemic began in early 2020, she decided to download TikTok. In its infancy, the social media app, which emerged from Chinese tech giant ByteDance in 2016, was mainly known for sharing videos of users lip-synching to pop songs from the 2000s. Over the past few years, it has taken Generation Z by storm.

As with many other online social platforms, niches and subcommunities began to form. A literary and readership circle, simply dubbed ‘BookTok’, was inevitable. Raymundo started sampling videos and eventually discovered many users who posted content discussing books. “I learned about a lot of new releases I hadn’t been keeping up with, and it encouraged me to start reading more for pleasure after a long time.”

No stranger to communities of online book-lovers, Raymundo avidly followed content creators on other platforms in the past, such as videos within the ‘AuthorTube’ community on YouTube.

“I tried to be a ‘BookTuber’ for about a month when I was fourteen,” she revealed, “but I didn’t realize how hard it was to make video essays regularly.”

If “brevity is the soul of wit”, as one classic work of literature reminds us, then this short video-sharing platform is the synthesis of literary discourse and modern media. For Raymundo, a sixty-second TikTok video is ideal for sharing her quick thoughts, emotional reactions, and synopses of books she is reading.

“As much as I love watching video essays on YouTube, sometimes I just don’t have the time to fully absorb or appreciate them,” said Raymundo, “but TikToks are easier to fit into my busy daily schedule, in between work and school.”

Raymundo began posting videos on her TikTok account ‘@bridgelikesbooks’ early in 2020, initially with limited viewership. As a recent video she posted on October 12th illustrates – where she parodies the scene from Marvel’s Thor: Ragnarok, in which the titular hero unsuccessfully attempts to access an abandoned Quinjet’s computer system – gauging audience and reader interest can be difficult.

But Raymundo eventually carved out her unique groove, molding her content around the genres of books she enjoys, through a mix of critical takes, memes, and monthly reading roundups. An early video Raymundo posted, sharing her queer reading of Sir Gawain and the Green Knight, garnered over 500,000 views, providing a major boost to her popularity. Now, ‘@bridgelikesbooks’ has almost 35,000 followers in counting, with her content receiving a cumulative 2.7 million likes.

As a Canadian content creator on TikTok, Raymundo’s account is not yet monetized through the platform. However, she does regularly receive advance reader copies (or ARCs) from publishers who wish to promote their latest releases. Above all, this young reader and shaper of literary discourse seeks to provide an accessible platform for viewers, both through the books she highlights and through features like providing closed captioning alongside her videos.

In addition to sharing her thoughts on books she loves, TikTok has also allowed Raymundo to connect with like-minded creators from all across the world. “It was strange because I was meeting and interacting with more people last year, despite the pandemic,” she said.

Currently a publishing intern with Simon & Schuster, Raymundo has noticed the tangible impact of ‘BookTok’ on the industry in which she hopes to work in the future.

“Books that were backlisted a year ago have now become New York Times bestsellers through getting mentioned a lot on BookTok,” she said. “Marketing teams have reconsidered their strategies because they never expected novels like Adam Silvera’s They Both Die at the End or Casey McQuiston’s Red, White, and Royal Blue to become so popular.”

In an industry infamous for lacking diversity within its ranks, providing a platform for marginalized authors to promote books is imperative for someone like Raymundo, who has a foot in both the worlds of publishing and new-age cultural commentary.

“If I see an opportunity to promote a good book that represents and was written by someone from an underrepresented group, I’ll take it,” she affirmed.

Diverse and progressive representation can come in many literary forms. For instance, Raymundo referenced Budjette Tan’s graphic novel Trese, about a demon hunter in Manila, which she recently read and mentioned on her account. “It was only this year that I read a book with a Filipina protagonist for the first time,” said Raymundo, who is half-Filipina herself.

As a relatively new medium, TikTok has yet to build up the same institutional power or structure as an established platform like YouTube. BookTokers like ‘@bridgelikesbooks’ are continuing to pioneer the frontiers of this online literary landscape, showing readers of all backgrounds and inclinations how to challenge established norms in the bookish sphere for the better.

“Everyone reads a different book,” Raymundo proposed. “Even if you’re reading the same book, you bring your own unique life experiences.”

Vikram Nijhawan is the Senior Arts and Culture Editor for Trinity Times, and a fourth-year undergraduate student at Trinity College, studying English, History, and Classics.