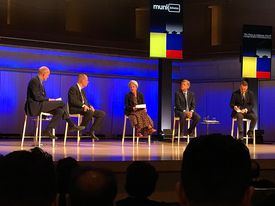 Four esteemed guests took two different stances on the path to peace between the two countries.

The Munk Debates, an organization that seeks to bring the world’s top minds to Toronto to discuss pressing global issues, began its iconic in-person series anew after a two-year hiatus to address an extremely relevant topic: the geopolitical consequences of Russia’s invasion of Ukraine, spurred by the country’s flirtations with NATO membership, and how to navigate towards a peaceful solution.

Established in 2008 by industrialist and entrepreneur Peter Munk (the same namesake of UofT’s Munk School of Global Affairs), the Munk Debates have welcomed some of the world’s leading thinkers over the years. After the COVID-19 pandemic forced the group to adapt to an online format through a weekly podcast, they returned in proper fashion at the Roy Thomson Hall on May 11 2022 for their Spring debate.

This debate’s motion was: “Be it resolved, ending the world’s worst geopolitical crisis in a generation starts with acknowledging Russia’s security interests”.

The Munk Debates’ official moderator, Rudyard Griffiths, introduced the event by acknowledging the stakes and consequences of the evening’s timely debate topic, which continues to unfold by the day as the war and human rights violations rage on in Ukraine. Audience members were given an opportunity to cast an initial vote on the motion, with the Pro side taking a narrow majority of 53%. Soon after, a projected countdown clock struck 00:00, and the debate began.

Mearsheimer and Walt came out of the gates waving the banner of Realism – the school in International Relations theory that posits that countries behave and act out of their own self-interest, as opposed to deep-seated ideology. In the case of the Russia-Ukraine war, they argue that Russia’s aggressive military response came out of a fear of their national security, with the threat of NATO and Western encroachment onto their borders. The invasion was, therefore – while an unquestionably immoral action, with devastating consequences for the Ukrainian people – a natural reaction according to the unwritten rules of statecraft.

“Great powers don’t back down when things get bad – they double down,” proposed Walt.

The Pro side thus proposed that a Western policy solely dedicated to defeating Russia would not be beneficial for long-term peace, and that the real solution lay in an agreement that would serve both Russia and Ukraine’s best interests. The cost of not doing so: military escalation, American intervention in the war, and in the worst-case scenario, the dreaded prospect of nuclear warfare, which would bring immeasurable destruction to the entire world.

Sikorski, arguing for the Con side, quipped that Mearsheimer, often deemed the “Pope of Realism”, was not protected under Papal infallibility when it came to his position. Rather than a product of the natural laws of statecraft, he and McFaul proposed that Russia’s actions had to do with one man, and one man alone: President Vladimir Putin. They argued that Putin’s imperial ambitions, and the West’s appeasement of his foreign invasions of neighbouring territories over the past two decades since his rise to power – from Georgia, to Chechnya, to Belarus, and Crimea – enabled this current conflict.

Both sides were well-researched on each other’s previously published writings, using them as ammunition against each other’s arguments during the Rebuttals portion of the debate. For instance, McFaul quoted one of Mearsheimer’s past writings, warning about the dangers of appeasement, which he used against his opponent’s point that an aggressive military response against Russia would escalate the conflict.

The debate wasn’t without its humorous detours, either. The amicable jousting between the opponents, the playful jabs and interruptions it entailed, added levity to the event, and made for a more “lively conversation”, in Walt’s words.

The Pro side made an ambitious analogy to illustrate their point, imagining a future scenario where Canada made a military pact with China, thus justifying a hypothetical American invasion.

“In what world would Canada ever make a military alliance with China?” Sikorski retorted, to the uproar of the Canadian audience.

Likewise, Mearsheimer’s claim that Putin would withdraw from Ukraine and its other conquered territories if the West stopped barring their teeth was met with a dubious crowd reaction.

The Pro side underpinned their position using traditional international relations theory and historical case studies, referring to examples like America invading foreign countries such as Vietnam, Iraq, and Libya – under the pretense of defending its national security – to point out the larger hypocrisy of the West faulting Russia for doing the same in Ukraine. Ironically, it was the Con side who more often steeped their arguments in the pragmatic reality of the present events – picking apart Putin’s false casus belli of “deNazifying’ Ukraine, and the proven impracticality of an invasion.

Mearsheimer concluded the Pro side’s position by advocating for a diplomatic approach like that of President John F. Kennedy’s during the Cuban Missile Crisis in 1962. In that Cold War chapter, America averted a heated confrontation with the Soviet Union, providing a roadmap for a similar peaceful solution, by acknowledging the interests of their adversary and putting aside political ideology.

The post-debate audience poll revealed a major shift in opinion on the motion. In contrast to the pre-debate poll, support for the Con side surged to 63%. An indication that, for the concerned global citizens comprising the audience at the Roy Thomson Hall that evening, Russia’s security interests and national well-being were not more important than that of any other country in the world, including Ukraine’s.

Whether ‘winning hearts and minds’, as the old diplomatic adage goes, will bring about a resolution to this geopolitical crisis remains uncertain. But as the outcome of this recent Munk Debate showed, important conversations in the public intellectual sphere certainly have the power to change minds.