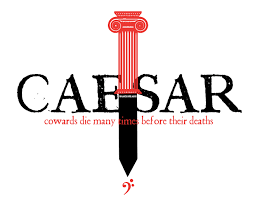 TCDS’ first show of the season will be filmed for release in mid-October.

Directing a production of William Shakespeare’s Julius Caesar has long been a dream for fourth year student Benji McLean. It was the second play he ever acted in,and it was the show that spawned his love for theatre.

But McLean’s upcoming filmed production for the Trinity College Drama Society (TCDS) may look a little different than the version he had envisioned six years ago, when the idea of directing this Shakespeare tragedy first came to mind.

With masks, guns, and two metres of separation, this production of Julius Caesar – the first production in the TCDS 2020/2021 season –  is not trying to hide the fact that it is being produced in 2020, amidst a raging worldwide pandemic.

“It’s set in modern times,” said McLean, “and you’ll see COVID manifest itself in the production.”

Part of it is out of necessity – there are strict government regulations surrounding physical distancing and mask use. (The first professional theatre production in the US approved by the Actors’ Equity Association was the musical Godspell, and featured actors performing with masks and standing behind plexiglass partitions.)

But McLean also hopes to emphasize some pertinent ideas by setting the production in contemporary times. “In this production, we’re trying to highlight certain ways in which characters deal with loss, such as coming to terms with their friends’ deaths, for example,” he said. “I think there are some relevant COVID themes [in the play], especially in the vision we’re trying to execute.”

McLean and his team – which includes a four person film crew – have faced multiple logistical challenges as they navigated public health regulations and the transition from stage to screen. More than half of the tight seven week rehearsal schedule was spent on Zoom, in addition to virtual online auditions. The production will be filmed over three days in late September, before premiering on a TBD streaming platform in mid-October.

Third year student and drama specialist Chloë Flowers found the online rehearsal process to be difficult at first. “I found [online rehearsals] really, really challenging, because so much of how I work as an actor relies on my connection to my other performers,” she said. “Not being able to be there and be present with them in person really changes the dynamic.”

For McLean, his challenge was staging the piece while maintaining two metres of separation at all times. “I found out about five minutes before we started our first in person rehearsal that the blocking was going to have to be six feet apart, even for the filming of the show,” he said.

McLean also highlights that this vision for this production goes beyond just placing Shakespeare’s work in a modern, pandemic-ridden world. In a somewhat radical reimagining of the play, McLean decided to cast a female actor to play Brutus, though keeping the original text with the he/him pronouns. The character is one of the conspirators behind Julius Caesar’s assassination and, as many literary critics would argue, the main character of the play.

“I feel that very few productions have cast Brutus as a woman, unless they were going for a gender flipped production,” McLean admits. But from the outset, McLean knew that the role had to be played by a woman. “I see Brutus as a character who’s going through such a clear gender struggle.”

Flowers, who plays Brutus, has enjoyed examining how her character expresses himself in different settings. “It’s not that Brutus is trying to shy away from his femininity because he’s ashamed,” she explained. “It’s because he’s worried about other people’s perception of that and how that will affect his career.”

Brutus isn’t the only character in this production who is getting portrayed in a different light. The titular character, played by fourth year student and TCDS Co-President Theo Iordache, is also being reenvisioned.

“There is a compulsion to portray Caesar as a fascist dictator, and that is not at all a new idea – it’s just been gaining more popularity now, for obvious reasons,” said Iordache. “We want to make the audience to feel sympathy for every character, so what we’ve been doing is trying to convey Caesar’s internal struggle with himself.”

Though audience members will be absorbing the play through a different medium than usual, the TCDS cast hopes that this production will encourage community members to seek out more theatre and stay connected with the arts community.

Flowers, an aspiring actor, is worried about the uncertain future ahead. “It’s very worrisome to think that the state of the theatre industry is going to be so drastically different than what I was expecting [before the pandemic hit],” she reflected.

But for now, she’s grateful for this production of Julius Caesar and the opportunity to flex her acting muscles once again. “To be quite honest, I didn’t think that I would be doing theater this soon because of the pandemic,” she admits. “But I couldn’t ask for a better team to go through this process with, because everybody has just been persevering together and everybody understands the struggles that we’re going through.”